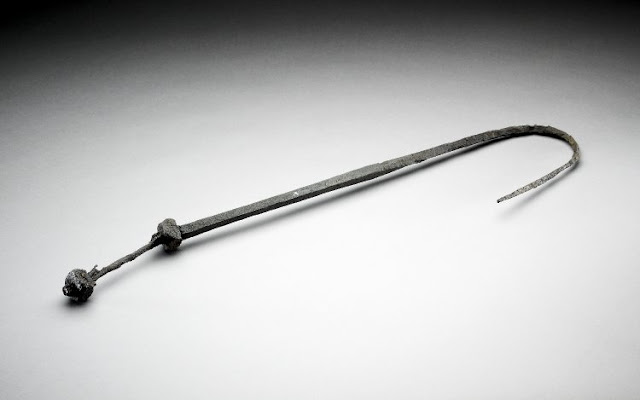 Last night, I was prepping for an upcoming class on Eirik the Red's Saga, and I suddenly realized I had material for a blog post that was more than just a link to gaming-related media. I was taking notes on the scene in the fourth chapter of the saga where Christian girl Gudrid Thorbjornsdottir gets roped into singing the "Weird-songs" (Varðlokur) for Thorbjorg, a pagan völva or "prophetess." The narrator is careful to describe Thorbjorg's gear, both her bag of "talismans" and her "staff ... with a knob thereon ... ornamented with brass, and inlaid with gems."

While looking for images of a völva's staff to show students, I came across the image reproduced above. It's a Norwegian grave good originally identified by British Museum curators as a spit or measuring rod—and since reclassified as a divination-staff. (Once you see some other examples of völva staves, this artifact obviously belongs to the same group of objects.)

The cool thing about the staff (and here's the payoff for GMs) is the curve in its one end: the curators believe that it was done in a smithy for the purpose of "ritually killing" the staff before burying it with its owner. With the staff bent, the dead völva could not use it against the living if she returned as a draugr. I'm not great with mechanics, so I can't come up with a "magic-item slaying ritual" off the top of my head—but I can immediately see the in-character possibilities for such slain items. At the very least, it's a nice bit of dungeon dressing: there's a wand in this sarcophagus, but it has been deliberately broken by whoever stuck the lich in there. It could be something more, though: how would the player characters go about "resurrecting" a dead magic artifact? Could that even be the focus of an entire campaign?
Labels: Dungeons and Dragons magic items